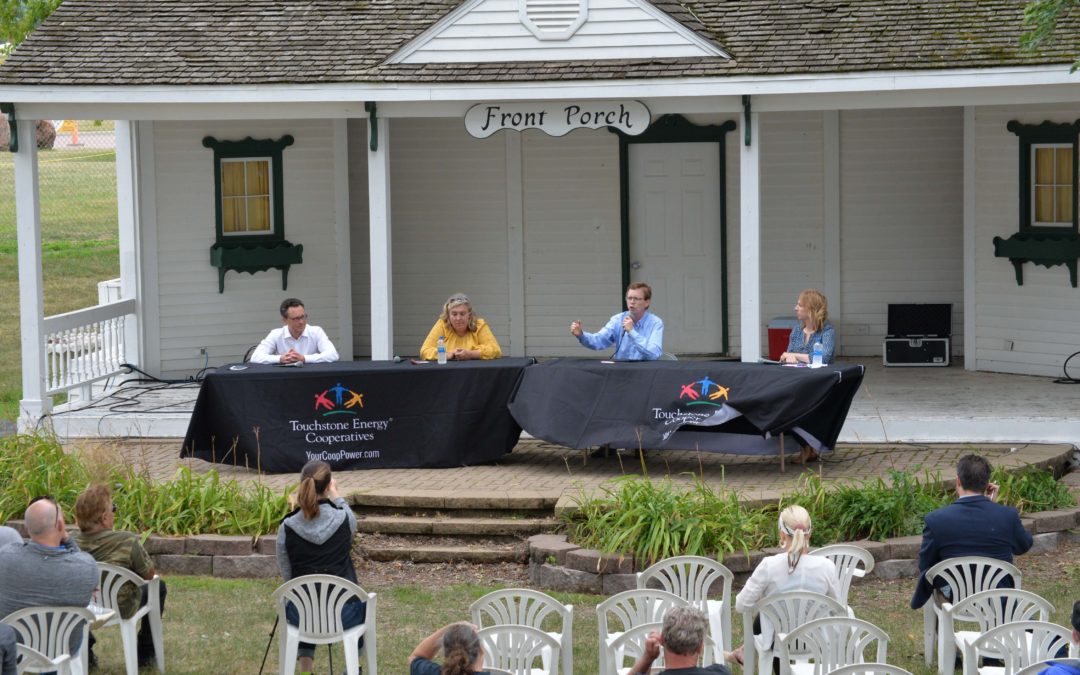 East River Hosts Discussion on Farming for the Future

A panel discussion titled ‘Farming for the Future: A Look at South Dakota’s Ag Economy’ featuring South Dakota Congressman Dusty Johnson was held on Wednesday, August 5 at the Sioux Empire Fair in Sioux Falls. The event was hosted by the region’s Touchstone Energy Cooperatives to examine South Dakota’s agriculture economy and explore possible relief efforts to help get the rural economy back on its feet. East River Electric Power Cooperative’s Communications and Marketing Manager Shayla Ebsen moderated the panel.

Food processing and issues with the food chain as well as consolidation in the agricultural processing sector were a few of the topics that the panelists discussed.

“You look at what happened to Smithfield, and frankly a dozen other meat packing facilities across this country, when you get those kinds of choke holds that means the producer gets less for the cattle and the pork they’re selling, and unfortunately the consumer has to pay more at the grocery store. Those are issues our country has got to resolve,” said Johnson.

“COVID has had major impacts on the entire ag sector,” said Richardson. “For corn specific, we produce around 800 million bushels of corn in South Dakota, which we use about 450 million for ethanol, we use about 80-100 million for livestock, and the rest goes out on rail to the Pacific Northwest where we export it around the world.”

“We’re in a situation now where billions of dollars have been lost from the balance sheet of the U.S. ethanol industry,” said Jennings. “We’re working with Representative Johnson and others to make sure that ethanol producers are not left behind in the fourth stimulus working its way through Congress.”

“Long term, we’re working on increasing demand. Part of that is pivoting to make sure that we supply other markets that emerge,” Jennings said. “One market that has really grown substantially through this pandemic is the need for disinfectants and the need for sanitizers. Not every ethanol plant has the ability to participate in those markets, but many have been able to pivot and produce a higher grade of alcohol that’s going into that growing marketplace.”

The region’s Touchstone Energy Cooperatives have been requesting relief for rural America throughout the pandemic. In May, East River Electric, along with 30 other electric cooperatives, signed on to a letter urging members of Congress to support additional stimulus package relief for food and ethanol processing plants, and the farmers and ranchers who serve them. The electric cooperatives represented on the letter combined serve over 3 million consumers across the region.

“We are respectfully requesting much-needed economic relief for rural America, which continues to suffer from the impacts of the coronavirus pandemic,” said East River General Manager Tom Boyko. “Rural electric cooperatives were created to provide electricity to farms and rural communities and have continued to expand this essential service as rural America has grown and prospered. Our member-owners have invested in not only the electric infrastructure through their cooperative to serve these areas, but also in helping to develop the rural economy in which they live. These investments have allowed for diversification into biofuels, food processing, and other business development opportunities.”