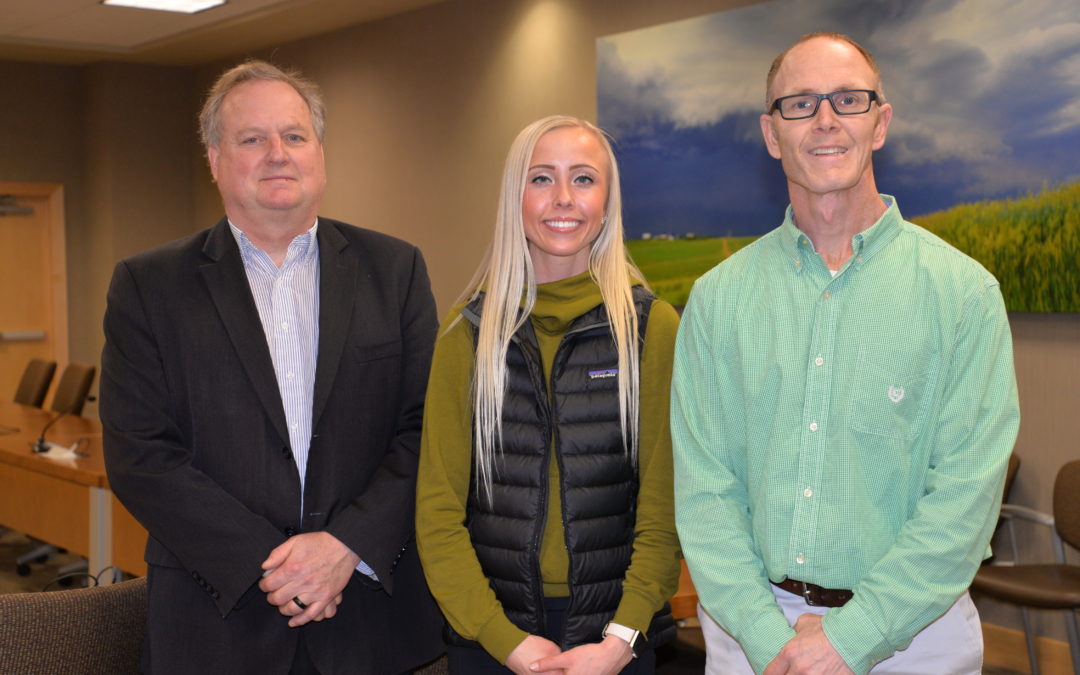 McKenna Sichmeller of Humboldt is the recipient of a $1,000 scholarship from Basin Electric Power Cooperative based in Bismarck, N.D. She is the daughter of Casey and Annette Sichmeller.

McKenna will attend South Dakota State University in Brookings to pursue a degree in nursing. After college graduation, she will go on to attend Mount Marty for their Nurse Anesthetist program. Throughout her years at West Central High School, McKenna was involved in volleyball, basketball, softball, band, FCCLA, FFA, National Honor Society and was the Class President. “Thank you for selecting me as the recipient for the Basin Electric Scholarship,” said McKenna. “It will help me on my journey to become a Nurse Anesthetist.”

“Congratulations to McKenna and her family on this wonderful honor,” said East River Electric CEO/General Manager Tom Boyko. “McKenna’s commitment to academics, athletics and her community shows her dedication to achieving her goals. We wish McKenna well as she continues her education at South Dakota State University.”

Federal Judge Lawrence Piersol has dismissed a lawsuit filed by Dakota Energy Cooperative against its wholesale power supplier East River Electric Power Cooperative, saying that the contract between the two electric cooperatives is clear and does not allow Dakota Energy to terminate its contract early.

“The ruling from Judge Piersol is a major victory for all of the electric cooperative member-owners across the state of South Dakota,” said East River Electric General Manager and CEO Tom Boyko. “A contract is a contract and Judge Piersol’s ruling is clear that the contract does not allow for an early termination. It affirms what we’ve been saying all along, Dakota Energy can’t just walk away from the commitment it made to its neighboring cooperatives. It is our sincere hope that this will end spending member-owner money on an expensive ill-fated legal battle.”

Dakota Energy had earlier signed a letter of intent with a for-profit energy broker, Guzman Energy, based in Denver, to receive wholesale power if their case was successful.

“This ruling ensures that Dakota Energy member-owners will continue to have access to reliable and affordable power from East River Electric, their South Dakota-based wholesale electric cooperative, for years to come and they won’t be forced into buying power from a for-profit company,” Boyko said. “Not-for-profit electric cooperatives have always worked together to provide affordable power to their members and this ruling ensures that a for-profit company like Guzman Energy can’t come into South Dakota and profit off of co-op consumers.”

This year marks the fourth year in a row that East River’s rates have been flat or have gone down. East River also returned more than $17 million in capital credits and bill credits to its members between May 2021 and February 2022. About $840,000 of that amount went directly to Dakota Energy.

East River Electric is a wholesale power cooperative headquartered in Madison which is owned by and serves 24 electric co-ops and one municipal electric system in eastern South Dakota and western Minnesota. It has long-term power supply contracts with its member systems to ensure long-term reliability and cost control.

East River Electric’s 58th annual fundraiser to support LifeScape was a success, raising over $44,600. LifeScape is an organization which promotes independence for over 2,500 children and adults with disabilities throughout South Dakota. This year, the event was held as an online auction and an online raffle. Many local businesses generously donated items to the auction and cash to the LifeScape organization.

“The online auction and raffle were very successful and a direct tribute to our employees fulfilling our Touchstone Energy Cooperatives principle of Commitment to Community,” said East River General Manager Tom Boyko. “I want to thank our employee committee for their outstanding work and long days of organizing the event, reaching out to donors and coordinating the auction. We also want to extend a heartfelt thank you to all the local businesses and member cooperatives that donated items to the auction and money to LifeScape. Our fundraiser was a success because of your generosity!”

The East River Employees Committee donated $1,000, a total matched by East River Electric at $1,000 and matched by Basin Electric at $2,000. CoBank also contributed $2,000 to the event this year. In the 58 years since the East River fundraiser began, more than $379,600 has been raised to help LifeScape provide services to children and adults in rural South Dakota.