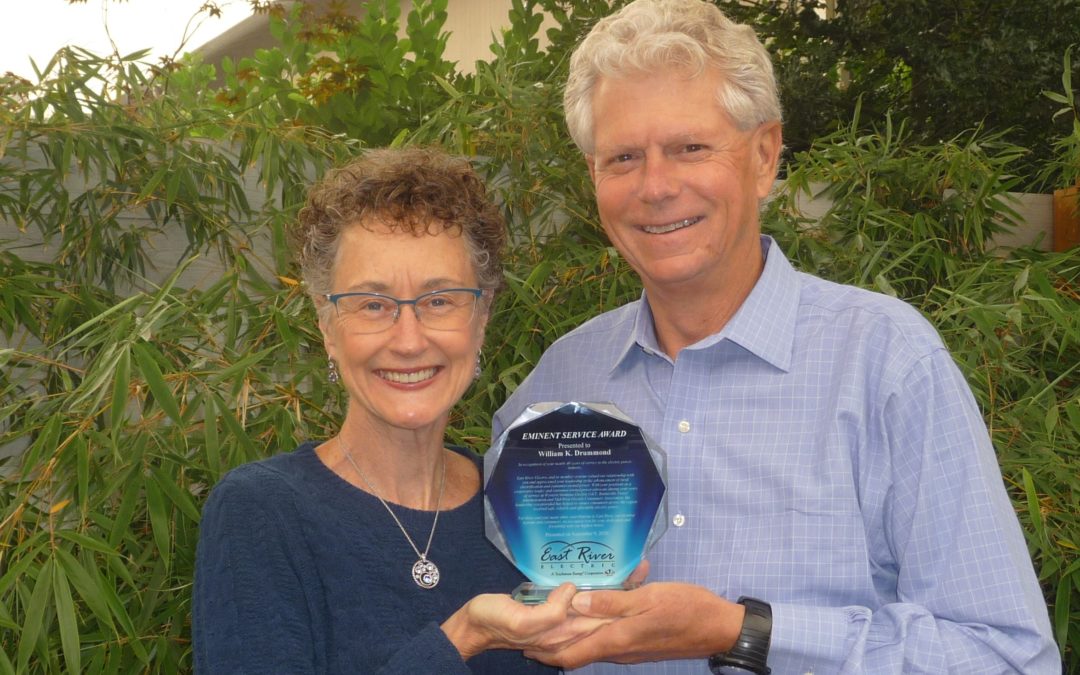 Bill Drummond, former executive director of the Mid-West Electric Consumers Association, was presented with East River Electric Power Cooperative’s highest honor, the Eminent Service Award, during the organization’s 70th annual meeting Sept. 9, 2020, in Sioux Falls. The award is given annually to individuals who have made significant contributions to East River and the cooperative movement.

Drummond dedicated his career to rural America and the region’s cooperative movement. His decades of work helped to strengthen electric cooperatives and public power to improve the lives of people across rural America.

“The energy industry has faced many challenges over the past several decades, and Bill helped our industry navigate them,” said East River Board President Jim Ryken. “During his tenure at Mid-West, Bill led efforts to protect against harmful legislation and repeated attempts to sell federally owned infrastructure assets and switch to market-based rates. Because of his steadfast leadership, the federal power program remains strong and continues to serve millions of consumers with renewable hydropower across the region.”

Drummond led the Mid-West Electric Consumers Association for 6 years where he managed the association of 300 consumer owned utilities and public power districts across nine states and represented Mid-West members in the Missouri River Basin, standing up for preference power and the consumers served by these utilities.

Before taking on the role with Mid-West, Drummond was the administrator and CEO of the Bonneville Power Administration and prior to that served as deputy administrator. Earlier in his career, he worked as the manager of the Western Montana Electric Generation and Transmission Cooperative, a position he held for 16 years. Prior to that he also created and managed Prairie Power Limited, Canada’s first generation and transmission cooperative and also worked for the Public Power Council in the Pacific Northwest and the Idaho Public Utilities Commission. He is a graduate of the University of Montana and earned a Master’s degree from the University of Arizona.