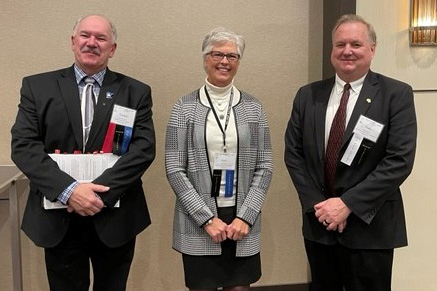 East River Electric Power Cooperative General Manager and CEO Tom Boyko was elected Dec. 8 to serve as the next president of the Mid-West Electric Consumers Association board of directors during the organization’s annual meeting in Denver. Boyko will serve a two-year term as board president. The Mid-West Electric Consumers Association, headquartered in Denver, promotes and protects the interests of federal power customers and their consumers across the Upper Midwest who purchase renewable hydropower from federal dams across the region. East River Electric is a customer of the Western Area Power Administration which markets federal hydropower.

“I’m honored to serve as Mid-West Electric’s board president,” said Boyko. “The organization and its members are focused on providing affordable and reliable power to consumers across our region by providing them with renewable hydropower from the region’s federal dams. I hope to continue the progress and success that Mid-West Electric has achieved over the years and continue to prepare the organization to respond to future challenges and opportunities.”

Boyko, who has been East River’s CEO since 2014, has served as the vice president of the Mid-West Electric board for the past year, and previously served as the organization’s board secretary/treasurer. Mid-West Electric monitors rates and their cost components that the Western Area Power Administration charges for federal hydropower and works closely with Congress, the Army Corps of Engineers and the federal Bureau of Reclamation to promote the interests of the consumer-owned utilities who purchase hydropower that serves consumers across the Upper Midwest.