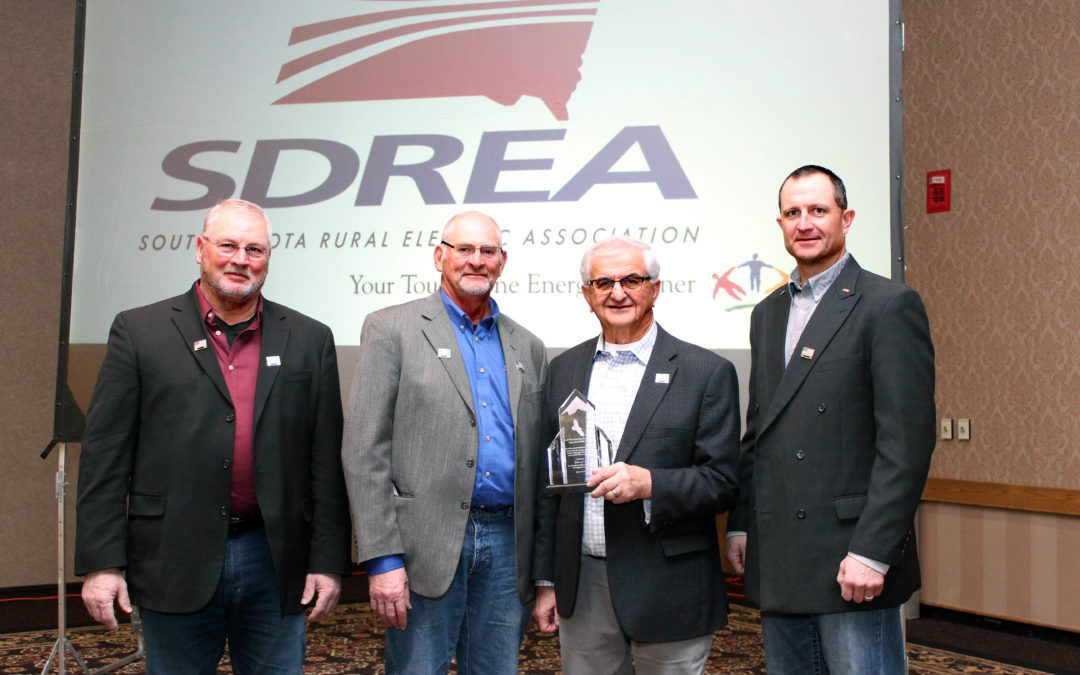 “It’s been a great pleasure to work with so many of you over the years,” Fink said during the presentation ceremony. “I’m very humbled to receive this award…I don’t feel I deserve it, but I’m very grateful and would like to acknowledge the many cooperative members and cooperative leaders I’ve had the privilege to serve with.”

In nominating Fink for this distinguished award, East River Electric General Manager/CEO Tom Boyko said the cooperative leader has been instrumental in guiding the organization through various shifts and changes in the industry over the past two decades.

“Ervin approaches his position on our board of directors with thoughtful professionalism and a very positive attitude. He can always be counted on to contribute engaging insight during board discussions. He has showcased his leadership in keeping East River’s costs low while also moving forward with projects that will allow us to continue successfully living out our mission of enhancing value for our members,” Boyko said.

Also nominating Fink was Douglas Electric General Manager Jay Spaans, who noted Fink’s advocacy work in supporting the Rural Electric Economic Development (REED) Fund. The program has distributed hundreds of thousands of dollars in loans for organizations throughout Douglas Electric’s service territory and has also launched a $4 million initiative to address the growing housing shortage throughout the region.

“Ervin lives out the seventh cooperative principle of concern for community in both his personal and professional life,” Spaans said, adding that Fink served in the National Guard for six years and is also heavily involved in his local church, St. Peter Lutheran in Armour. “He supports cooperative youth outreach programs and understands that today’s youth will become our future cooperative and community leaders.”

Kevin Czymbor, pastor at St. Peter Lutheran, commented on Fink’s personal integrity and character: “Ervin represents the best that there could be in a neighbor. Whether a stranger or a lifelong friend, he gives everyone the same love and respect they deserve, not because they did something to earn it but merely because they exist. If he becomes aware of a need that he has the ability to meet he does not hesitate to share his time or resources to do so.”

The 2021 East River Energize Forum will be held at the Sioux Falls Convention Center, Sioux Falls, South Dakota. The program is scheduled to begin at 12:00 p.m. with a luncheon for registered attendees on Wednesday, February 3, and conclude at approximately 11:30 a.m. on Thursday, February 4. Click here to view the agenda.

Registration should be completed by January 22, 2021.

It is very important to indicate on the registration form if guests are planning to attend the evening dinner to help us make final arrangements. East River will make all of the arrangements for the East River directors.

Registration
Please fill out the following form to register for the East River 2021 Energize Forum. If you are registering multiple attendees, a form will need to be submitted for each attendee. For assistance with online registration or to make any changes to your registration, please contact Christina Konechne at ckonechne@eastriver.coop or 605-256-8235.

Room Blocks
Room reservations are available at the following hotels by asking for the East River Electric Block: